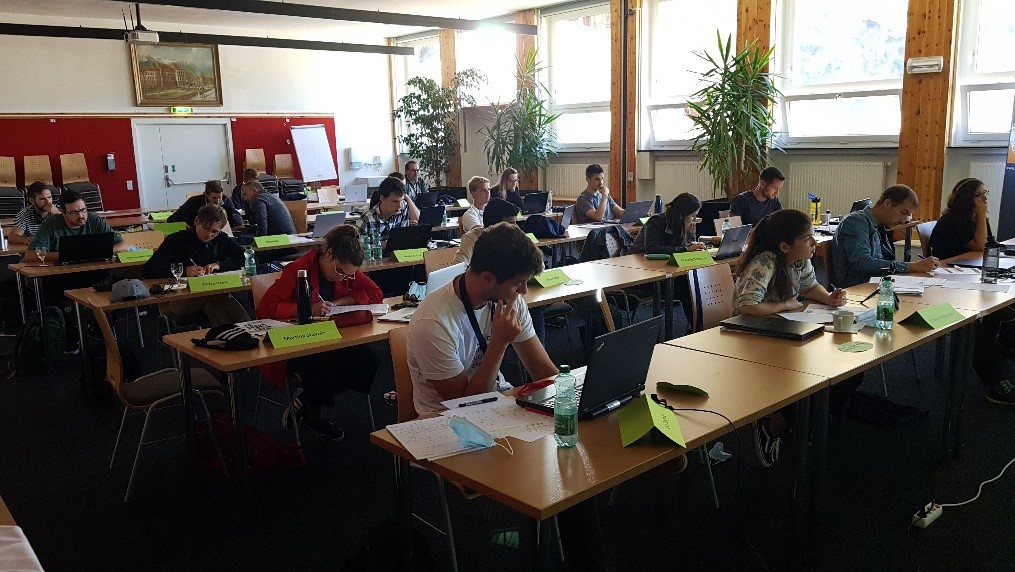 The objective of the nwt 5 has been to train participants on the advanced simulation of ropes and cables. The contents included the absolute nodal coordinate formulation, ALE formulation, geometrically exact beams, and the efficient computer implementation, specifically with regards to open source simulation codes. Additionally, the local frame approach and Lie group methods have been introduced for beams. Together with lectures on the latter topics, a challenge has been posed to the participants, which they attempted to solve in the remaining slots. Social activities were also part of the week.

In particular, significant progress has been made with respect to computer simulation in C++ and python. The open source code Exudyn, for which significant extensions are made within THREAD, has been introduced and utilized in order to acquire knowledge on the implementation of numerical methods for slender structures and multibody dynamics. Step-by-step examples have been examined how to define coordinates and equations for simple planar formulations for slender structures, which shall serve as a basis for the implemented of advanced methods developed during the course of the projects. Advanced computer simulation techniques have been discussed in order to be able to develop efficient formulations that can be applied to industrial problems in future.

A recently developed arbitrary Lagrangian-Eulerian finite element formulation (ALE-FEM) developed for the dynamic analysis of wire ropes in reeving systems has been presented to the students. The method is shown to be suitable for the dynamic analysis of these mechanical systems as it accounts for the main effects that have an influence in the system response. A general and systematic approach for the modelling and simulation of reeving systems have been introduced together with a set of examples of application.

The participants mainly worked on the challenge on days 3 – 5 and presented their results within four presentations. It turned out that the teams worked efficiently and achieved high-quality results with different approaches in a very short time. The success of their work can be partly referred to the interdisciplinary setup of the teams as THREAD researchers work in different engineering and mathematical disciplines.

In general, we may say that nwt 5 has been a great success. The quality of lectures was high and included important methods for the future work of ESRs. The participants welcomed the inspiring and pleasant atmosphere of the remote seminar location.