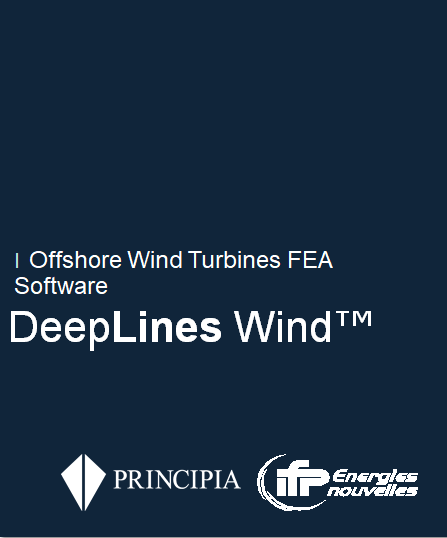 The industrial workshop of PRINCIPIA SAS, on modelling of offshore wind turbines, was held online on April 15-16, 2021. This workshop was organized by CentraleSupélec and PRINCIPIA SAS.

PRINCIPIA is an engineering company specialized in oil & gas engineering, marine renewables energies, naval harbour engineering and nuclear activities. The workshop was focused on the software DeepLinesWindTM, which is the finite element simulation software developed, used and sold by PRINCIPIA for design of offshore wind turbines. A beam model (which could be considered as the most important topic in THREAD project) is used in this software for modelling various slender structures.

During the two days of the workshop, we had intensive lectures given by Violette Harnois, senior hydrodynamic engineer at PRINCIPIA, that introduced the different options and capabilities of the software to us. In the first day, we had the general introduction to the software. We learned about the reference frames, lines modeling, etc. The presentations were accompanied by live demonstration, which made it easier and more interesting to follow the lectures.

The second day started with introduction of different modelling approaches for floaters. The day continued by setting up a WTG (wind turbine generator) model in the software. By the end of the second day, we had enough knowledge to setup a simple wind turbine model.

I believe the industrial workshops are very useful as they give us the opportunity of becoming familiar with different industrial applications of the theory we are working on. At least for me, this is a huge source of inspiration.